On the Eve of Xmas Eve we received a call that was one of the most surprising we’ve every had.  A man from Panorama City was driving to a mall 10 miles away from his home to do his last minute Xmas shopping and after stopping off at a few spots he pulled into Northridge’s Best Buy.  When he came out of the store his car, mysteriously, wouldn’t start.  He opened his hood, looked down and saw a cat burrowed down under hoses and cables in the engine compartment!  She was so deep in the mechanics that there was no way to reach her.  One person, then another, then the parking lot guard stepped up until a crowd had gathered.  After an hour of debate, pulling tools out of trunks and offering different ideas on how to rescue the terrified kitty, hoses and cables were removed and the security guard was able to reach in and pull Holly out.  We put her in the adoption center at Petsmart Northridge to eat, rest and relax.  I scanned her and amazingly she had a microchip….HOORAY for chips….and that chip led us to her human.  She had been gone for a week and her mom was looking all over Panorama City so imagine her surprise when Holly showed up in Northridge!!  She’s home with her mom and kitty sister and everyone’s celebrating a wonderful and most unexpected Xmas miracle! 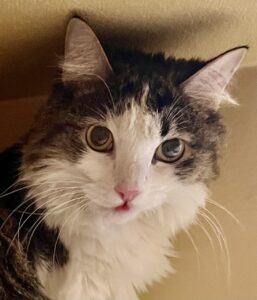 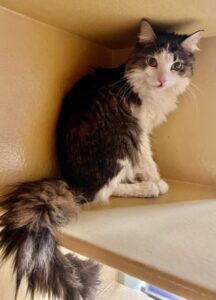