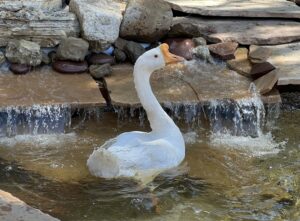 Lucy the Goosey came to Rancho Providencia in 2014 from a wealthy couple in Santa Barbara who had a huge aviary on their property. The man had been a successful producer, but when business dried up, he feared for the future of his estate and the fate of his feathered friends.

Lucy was just a hatchling when TARA took her in, but she grew into a grand goose. Like most other geese, who are used in some places to patrol properties like guard dogs, Lucy is LOUD, making honking noises that can almost sound like screaming. She adds her own chorus to the cacophony of sound made by the many rescued animals on the ranch. 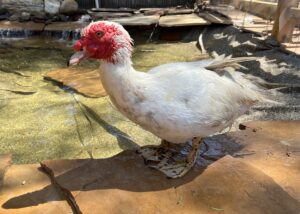 Lucy’s pond pal is DuckDuckGo, who was found with an injured leg in a local backyard. TARA was asked to take him in, where he recovered at the ranch and bonded with Lucy. Now the two engage in fowl play all day.

To help us rescue more animals like these, please consider making a one-time or recurring donation to The Animal Rescue Alliance.