When people first visit Rancho Providencia, they’re usually struck by the peaceful serenity of the property, with its overhanging oak trees, billows of bougainvillea, profusion of native plants, and Southwestern-style main house in tranquil tones of terracotta and ochre. Which is why, upon walking up the drive, they’re often surprised to spy the vivid colors and exuberant images of a pop art mural through the leaves. This is the cottage of famed artist Todd Gray, charmingly christened “The Toddage.”

Here’s what Todd has to say about his diminutive dwelling on the grounds of Rancho Providencia: 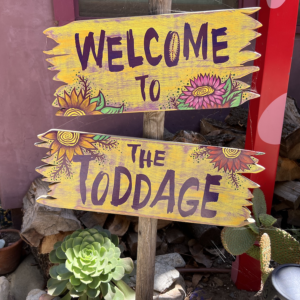 “People often ask me how I came to live in The Toddage. Generally, I’ll tell them that I was in need of a place to live and God said, ‘Here you go Todd. Enjoy.’ Well, that’s the story, and I’m sticking with it. Truth is, just substitute ‘God’ with ‘Kelly’ and the story is accurate. When Kelly Holland first offered me what would soon be called The Toddage, it was in severe disarray, as it had been a place to house dozens of cats (basically a cat house) for many years. The floor was buckled from cat urine, the appliances needed replacing, it needed a complete overhaul. I looked at it, I looked at the surroundings, and said, “Perfect!” Then I set about renovating it. 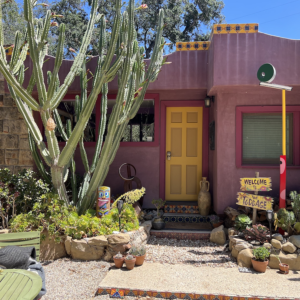 “I have never for one second of one day ever not appreciated living on this miraculous property that never stops giving. Kelly gave me the green light to paint the mural on the side, as well as giving me carte blanche to renovate it however I desired. It’s always a soulful work-in-progress and has many loving elements of others’ help along the way.

“Originally, Kelly lived in this guest house for two years as she built the primary home. So, it started out soulful. It later became a refuge for countless animals and, finally, in this iteration, a place that I love and am grateful to call home. This property was, for many years, home to countless indigenous Indians, and their ancestral energy is revered and felt and respected. It’s a property that never stops giving.”